California ad agency CEO soars to new heights after getting involved locally
We met at a local coffee place. “Please, no Starbucks,” he emailed when I suggested a meeting place. It had to be a place that was locally owned. He offered a few suggestions, seemingly not wanting to choose “which” local spot. When I met Pat Amsbry, it became clear why. He is intensely passionate about Pasadena, California, the community where lives and works – and he always supports local business owners.
I sat down with Pat, a second-generation owner of a 42-year-old media company to learn how his efforts to make a positive impact for his business and clients are making a difference in his community and beyond. “My wife Kate and I are deeply committed to the Pasadena community,” Pat said. The couple, married for nearly 25 years, are both local business owners: Kate is a realtor with Sotheby’s International Realty, and Pat is the owner of Flying A Media, a media-buying agency. They both work behind-the-scenes on numerous philanthropic endeavors, including volunteering with local public-school campuses, volunteering as reading tutors, and training to serve as volunteer officers with the Pasadena Police Department. Kate also mentors local high school students with their college preparation and applications, and Pat serves on non-profit boards and chairs the board of directors of a non-profit aquatics facility that serves the Pasadena community.
While Pat has remained quiet for many years about the ways he and his wife give back to the community they love, he hopes by sharing their story, others will be inspired to make a difference. “We’ve been encouraged to speak up because it might inspire others to get involved,” Pat said. But at the end of the day, “we do the things we do because we know it’s the right thing to do.”
Pat and Kate’s volunteerism, which began when their two sons, Jack and Tom, were young, initially revolved around fundraising for the boys’ school activities – helping out with Boy Scouts, and coaching their kids’ sports teams, including soccer, baseball, flag football and basketball. “For a long time, I was only focused on organizations that were directly related to my family,” recalled Pat. Their focus soon expanded when sons Jack and Tom entered high school. “Our oldest son Jack was a Boy Scout and to achieve his Eagle Scout rank he needed to complete a pretty involved community project. He selected an organization called Reading Partners and then designed and built custom bookshelves, established a reading desk and held a book drive and fundraiser for the organization. It was an amazing project and it opened up our eyes to the many organizations that were doing so much good in our community,” Pat reflected. “Jack is now a senior at Tufts University, studying mechanical engineering, designing and building bigger and better things and still inspiring us,” Kate added. Pat remembered, “we started to reflect on how grateful we are, and how fortunate we’ve been to raise our children in such a wonderfully diverse community.” Through this paradigm of gratitude, “it became important to us that we find a way to get involved and contribute to the Pasadena community.” The couple’s expanded mindset led them to discover other organizations within the city, notably the unique inequities in public education in Pasadena. “This became a really big interest for us – helping to create access to educational opportunities for kids both in and outside the classroom,” he said. “Our eyes opened to all that was going on in this wonderful city. A place that provided such an amazing upbringing for our kids and so many great friendships. So we began this journey of connecting with other communities, people and nonprofit organizations.” One of their first independent philanthropic endeavors was partnering with James Madison Elementary School. “Madison Elementary is a beautiful school, built in 1926. It looks like it could be a movie location.” Pat noted. “For many years we drove by the school and never paid it much attention unfortunately and then three years ago we thought maybe there’s something we can do to get involved.” Their first initiatives were built around the classroom including providing classroom supplies, developing a school-wide attendance incentive program, supporting a teacher recognition program, and launching an annual book drive that has reaped thousands of books for the school’s library and the Reading Partners Resource Center on campus. The attendance incentive program now delivers outsized results for student attendance and has inspired a similar program launched across the district. Their efforts have evolved into an organization they founded called Friends of Madison Elementary, a nonprofit organization. What began three years ago has grown into a community organization, with a neighborhood advisory board, with the capacity to raise funds through tax deductible donations. One hundred percent of the proceeds go towards creating more equity, greater access and opportunity at Madison Elementary School. “With Friends of Madison, we have set out not just to support our friends at our local school, but to create a new, community-based funding model to try and bridge the gap between other sources of funds for local public schools. Our goal is to take this model to other communities so they can replicate it within their own neighborhoods and their own schools,” Pat said.
“We hope our concept proves that with some care and a little bit of effort, and support from the community, you can create a lot of good without a lot of red tape,” Pat noted. Today, Pat and Kate’s primary philanthropic focus is all about equity, access, and opportunity and it is the main reason why The Amsbrys decided to get involved with another valued Pasadena, California organization: the 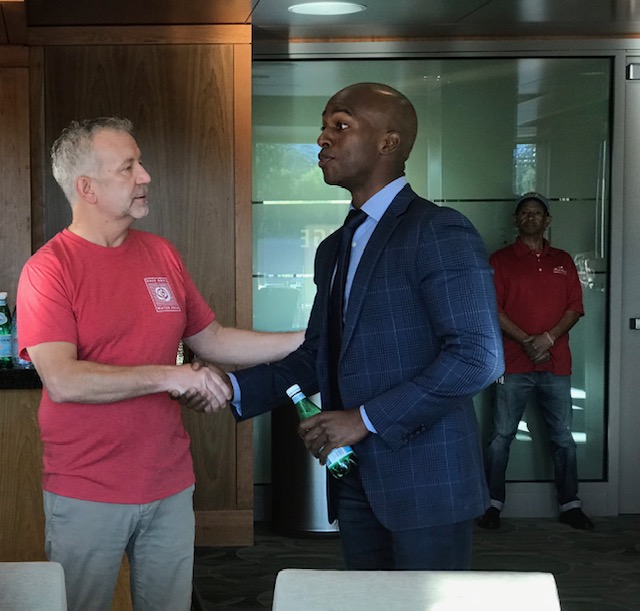